Watch history being made - Aaron Judge hits his 62nd home run, passes Roger Maris for most homers in AL history (via Yankees)

Video - Watch Aaron Judge make history as he hits his 62nd home run of the 2022 season, breaking his tie with Roger Maris for the most in American League history.

Posted by commoncents at 8:44 PM 0 comments

Ukraine continues to be on a military roll. Its army has made its biggest breakthrough against Russian forces in the south of the country since the war there began.

Ukraine makes biggest breakthrough in south since war with Russia began
While Ukraine counteroffensive makes gains in the south, the Kremlin says it still has to define the exact borders of the territory it is aiming to illegally annex. The outline of the areas its troops are occupying is rapidly changing.
In a major breakthrough, Ukrainian forces pushed back Russian defenses in the south of the country while expanding their rapid offensive in the east. They are seizing back more territory in areas annexed by Russia and threatening supply lines for Putin's troops.
Moscow-installed leaders there have acknowledged Ukraine's advances in the Kherson region - one of four that Russia moved to swallow up last week. Ukrainian troops are said to have gained territory as much as thirty kilometers away from where the front stood just days ago.
As Ukraine advances, how close are we to a nuclear escalation? | DW News
Posted by commoncents at 7:00 PM 0 comments 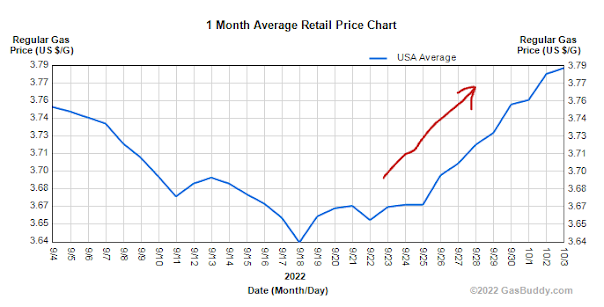 Gas prices have been on the rise since at least Sep 19th!  In that time gas prices for Unleaded have gone from $3.64 a gallon to $3.79 a gallon across the country, a significant 15 cent rise.  And likely they will continue to rise - sadly.  We did have a nice break there for a while but gas prices are HIGHER than they were a month ago!
https://amzn.to/3VeZtLF
Posted by commoncents at 6:30 AM 2 comments


How to help - - here are sites and charities helping Florida and South Carolina recover from Hurricane Ian -- UPDATED!!!
Posted by commoncents at 8:31 PM 0 comments

"I don't know but it's not comedy" - ManningCast Cold Open - SNL

Peyton and Eli Manning (Miles Teller, Andrew Dismukes) take a break from their ManningCast to break down what's happening on the premiere of Saturday Night Live.

Posted by commoncents at 4:21 PM 0 comments

Some charities use disasters as fundraising opportunities with no clear idea of how they will use your donations to help victims, or with no experience or expertise in providing boots-on-the-ground disaster aid. Don’t waste your charitable donations! View CharityWatch’s list of Top-Rated charities providing aid to victims of Tropical Storm Ian on our blog at www.CharityWatch.org
@CharityWatch
@Direct Relief
@All Hands and Hearts
@American Red Cross
@Americares
@Samaritans Purse
@Team Rubicon
@Episcopal Relief & Development

Posted by commoncents at 8:59 PM 0 comments

Posted by commoncents at 8:50 PM 1 comments

Email ThisBlogThis!Share to TwitterShare to FacebookShare to Pinterest
Older Posts Home
Subscribe to: Posts (Atom)
To support Common Cents use this link here
when you shop online. A small portion of your purchase goes to the CC site at NO COST TO YOU! In addition you can even bookmark the site. There will be no difference in your shopping experience and we don't know who uses the link