The economic realities of a Democrat Congress

are devastating.  Make no mistake - when the Democrat took over Congress in January 2007 the economy was relatively healthy.  Unemployment was at 4.6% and the deficit was a $161 Billion.  Yes these were relatively high numbers but in reality these were the "good old days."

Consider the average unemployment rate in the Obama administration vs the previous two. 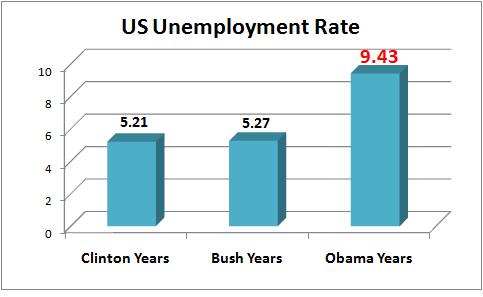 Or consider the deficit.  When the Dems took over it was actually declining and stood at $161 Billion: 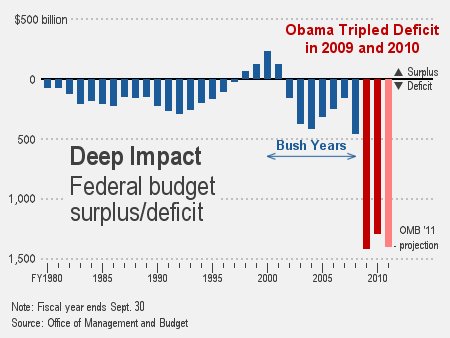 Can you say "disaster".  These people have no business running a Hot Dog stand - much less the world's largest economy.
Posted by commoncents at 12:32 AM

Although this is true, you can't forget how they entered Congress. There is nothing they could have down about the crash in 2008 because of the subprime mortgage market. A lot of the unemployment we currently have came from that. Not all of the misfortunes can be blamed on the democrats, but some definitely can. Hopefully tomorrow will bring a change.

Actually, the unemployment rate is at or close to 15%, which includes people who have simply stopped looking for work.

Caitlin Of course you are a democrat and an environmental major so of course you would give an answer like that. The subprime mortgage market did not create our unemployment problem. That is a stupid and typical liberal statement. And the subprime mortgage market crash happened because of the democrats led by Frank and Dodd not doing anything about fannie mae and freddie mac, and also them forcing banks to make loans to people who could not possibly pay a mortgage. I'll tell you what you just keep wondering around in the snow and playing with the wolves. You are going to college and majoring in something that is so liberally biased that it is a joke. So you are listening to all those wonderful people who should not be allowed in any university who will try to blame Bush no matter what. I am so tired of people who blog like you and don't have any of the facts.