Just not fast enough.  You may not find this anywhere else but both geographically and by raw numbers the country is trending (slightly) Republican.


As of this writing Barack Obama is beating Mitt Romney by about 3%.  Since Obama won by 7% last time the country as a whole is trending Republican by 4% overall. And as Michael Medved writes:

The president drew 7.6 million fewer votes than he did in the hope-and-change election of 2008. His vote total, 61,911,000, is far closer to the numbers in Sen. John Kerry’s losing bid in 2004 than to his own triumphant support four years ago. Even the reviled President George W. Bush earned more raw votes, from a much smaller potential electorate, in his own reelection bid than Obama did in his.
It’s also not true that a powerful surge of new black and Latino support powered the president to victory. Exit polls showed that Obama got a slightly smaller percentage of the black vote than last time and that turnout was sharply down, delivering at least 1.5 million fewer African-American ballots for the Democrats. A slightly enlarged Latino electorate and an increase in the president’s percentage of Hispanic voters, to 71 percent from 67 percent, did provide him an additional 700,000 votes, but the falloff in black support still meant that overall “minority votes” for Obama went down, not up.
As to the claim that Obama pulled out a win in this highly competitive election cycle by building up his backing among working-class whites in Ohio, Wisconsin, and other key battlegrounds, the evidence shows the president losing, not gaining, ground with this badly battered segment of the population. Among white voters overall—still 72 percent of total ballots, down from 74 percent in 2008—Obama lost to Mitt Romney in a devastating landslide, 59 percent to 39 percent. Four years ago, he also lost the white vote, but by a far more modest margin of 12 percentage points rather than the 20-point blowout this year. Compared to his Election Day performance in 2008, Obama lost more than 7 million white votes.


And the Wall Street Journal give us some more metrics: 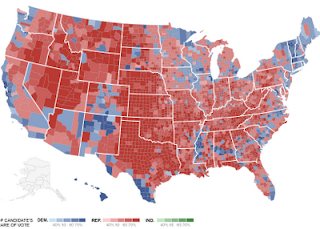 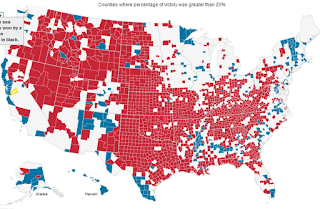 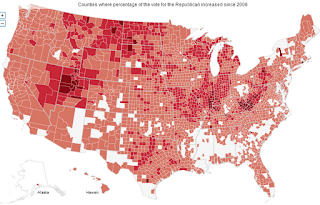 Contrast that with the counties that are truly trending Democrat since 2008.  They are few and far between, mostly in the South. 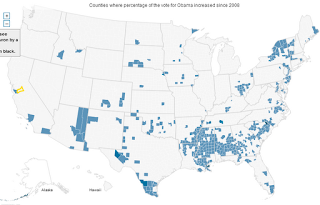 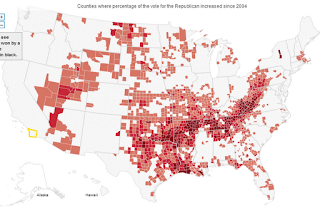 Obviously geographically the vast majority of the country is trending Republican.  You can see more  maps here at the Interactive Wall St Journal Election Site.  Just don't expect the State Controlled Media to tell this story.
Posted by commoncents at 8:12 PM

looks like all the blue dots are at the edge of the nation, on the coast, are the comming in or getting ready to leave, but not staying

lets pray for the best of the red dots.

As for numbers of total votes received: wait until January when the votes are certified as not all votes have been counted. And think about how many more votes we would have had in this country without GOP vote suppression.