Republicans. Want to win? Pull out this Secret Weapon! 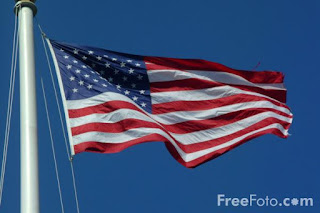 Believe it or not, just seeing the American Flag makes people MORE LIKELY TO VOTE REPUBLICAN.  And this lasts up to 8 months into the future!!  Pull out those flags folks!!


As a visitor to the USA, one sometimes gets the feeling that it’s hard to move or look around without seeing a flag. They are seemingly everywhere, an omnipresent reminder of national identity. But the star-spangled banner is more than a symbol; it can also influence minds in unexpected ways. Travis Carter from the University of Chicago has found that when people think about voting decisions, the mere sight of the American flag can subtly shift their political views… towards Republicanism.  It’s an effect that holds in both Democrats and Republicans, it affects actual votes, and it lasts for at least 8 months.
In the run-up to the 2008 US presidential election, Carter recruited a group of around 200 volunteers and asked them about their political views. A month or so later, he split them into two groups that were comparable in terms of their political beliefs, voting intentions and other variables. Both groups rated how likely they were to vote for either the Democrat Barack Obama or the Republican John McCain on an online questionnaire. The questionnaires were identical except for one small detail – in the top left corner of the screen, one group saw a small American flag and the other saw nothing.
That tiny difference was enough to swing their voting preferences. Carter found that the volunteers who saw the tiny flag became more likely to vote for McCain than Obama (relative to their answers at the start of the experiment). They claimed to feel more positive towards the Republicans and even when Carter tested their unconscious atittudes, a small Republican bias still came through.
After the election, Carter contacted the volunteers again and asked them who they actually voted for. He found that those who saw the flag were less likely to have voted for Obama than those who didn't (73% versus 84%). They were also more likely to think that the media were unduly harsh in their treatment of McCain. Remember that there were no differences in the political leanings of the two groups before one of them saw the flag-bearing questionnaire.
Finally, in July 2009, Carter caught up with his volunteers one last time. Even though eight months had passed since half of them saw the tiny flags on-screen, these recruits still showed some Republican bias. They were less happy about Obama’s job performance than their peers, less warm about other liberal leaders, and even held slightly more conservative views. (Bear in mind that in this final round, only a third of the original sample answered Carter’s call; however, both the flag and no-flag groups were equally represented).
The effect of Carter’s simple questionnaire is stark in both its size and duration He writes, “A single exposure to an unobtrusive American flag shifted participants’ voting intentions, voting behavior  attitudes, and beliefs toward the Republican end of the ideological spectrum.“ This was true whether the volunteers identified as liberal or conservative – people from both ends of the spectrum shifted towards Republicanism.
This isn’t the first time that a national flag has provoked such a striking effect in a psychological study. In 2007, Ran Hassin (who led Carter’s study) found that the sight of an Israeli flag could affect the attitudes of people involved in the Israeli-Palestine conflict. The flag appeared too briefly to be consciously seen, but still it drove the volunteers towards a more moderate stance in the political center. And the brief flash of flag even shifted the volunteers’ votes.
But there is one important difference between the two studies: the Israeli flag pushed people towards the political center, but the US one shifted people to the right. Why?
Perhaps the volunteers moved towards the dominant party at the time? Carter thinks not. In the spring of 2010, with Obama a year in power, Carter recruited 70 people and asked them to look at four photographs. Half the people saw buildings with flags in front of them; the others saw photos where the flags had been digitally removed. Even though the two groups had the same spectrum of political beliefs beforehand, the flag group shifted towards a Republican worldview after seeing the photos. It doesn't seem to matter who is sitting in the White House at the time.
Instead, Carter suggests three alternative explanations. First, it’s possible that the flag does shift people to a more moderate position. Carter’s recruits tended to be more liberal than conservative, so if they all moved towards the political center  that would come across as a shift to the Republican end. The fact that conservative volunteers shifted further to the right argues against this, but it would be simple enough to test by repeating the study with a group of predominantly Republican volunteers.
Second, people might associate the American flag with Republicans more than Democrats. Carter demonstrated as much in a small pilot study of 50 people – they associated brandishing the flag with Republicans more than Democrats. And indeed, previous studies have found that conservative Americans are more like to own or display a flag than liberals are. Carter writes, “The American flag conjures up Republican beliefs and attitudes, and these primes collectively push people in the Republican direction.”
Third, people might simply believe that the average American is more conservative than they are. Carter argues that people associate national flags with the archetypal citizen, and if they see a flag, they might shift their attitudes towards that imaginary every-American.

Fly those American Flags my friends!  You can read the rest of the story here.
Posted by commoncents at 6:37 PM

when you shop online. A small portion of your purchase goes to the CC site at NO COST TO YOU! In addition you can even bookmark the site. There will be no difference in your shopping experience and we don't know who uses the link