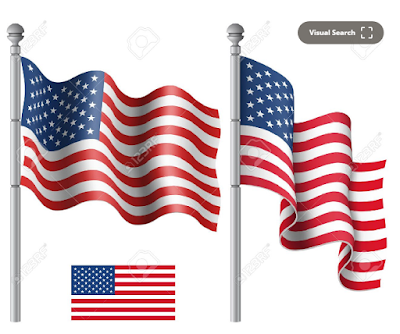 Amazing but true.  Turns out just a glimpse of the American Flags makes people want to vote for Republican candidates.  And even better, the effect can last up to eight months!  So start flying those USA flags!

Just a glimpse at the American flag can sway voters, even Democrats, toward more Republican voting behavior, attitudes and beliefs, a new two-year study says.
The authors, from the University of Chicago, Cornell University and Hebrew University, say the research proves the American flag has a powerful effect on voters.

"A single exposure to an American flag resulted in a significant increase in participants' Republican voting intentions, voting behavior, political beliefs, and implicit and explicit attitudes, with some effects lasting eight months," reads the study titled, "Long-Term Effects of U.S. Flag Exposure on Republicanism."
"These results constitute the first evidence that nonconscious priming effects from exposure to a national flag can bias the citizenry toward one political party and can have considerable durability," the study says.
In the study, first reported on by "U.S. News and World Report," participants, mostly Democratic-leaning, were asked to fill out a survey about their opinions on Democratic and Republican parties, leaders and their voting intentions. Half of the surveys contained a small American flag in the top left corner. They were given out just before the 2008 presidential election.
Although 90 percent of participants said they wouldn't be influenced by the presence of a flag, the scholars found that the participants exposed to the flag had a bias toward the Republican Party and shifted their behaviors toward the Republican end of the spectrum.
"A single exposure to a small American flag during deliberation about voting intentions prior to a general election led to significant and robust changes in participants' voting intentions, voting behavior, and political attitudes, all in the politically conservative direction," the study reads.
To ensure that the party in power at the time of the test didn't have an effect on the survey answers, another survey was conducted eight months after the 2008 election. Results found that participants exposed to the American flag "felt less positively about Obama's job performance."
To further prove their point, a third test was conducted in May 2010 in which participants were shown pictures of buildings with a flag and others with the flag digitally erased.
The last test resulted in similar answers to the first two, reinforcing the argument that even subtle exposure to the American flag considerably shifted people's beliefs, Republican or Democrat, toward Republicanism.
A study of the impact that viewing the American flag has on politics has not been done before, but it is similar to a study recently conducted by Harvard University.
That study's findings argued that attending July 4 parades are more beneficial to the Republican Party -- they boost turnout of GOP voters, increase Republican patriotism and turn kids into Republicans.
The authors in the current study also cited a 2007 "Personality and Social Psychology Bulletin" report that concluded that brief exposure to the American flag increased aggressive thoughts and behavior, especially among those who followed political news.

Read about it here.

Posted by commoncents at 8:54 PM

The president and our Beautiful First Lady are the first state guests of Emperor Naruhito in Japan.